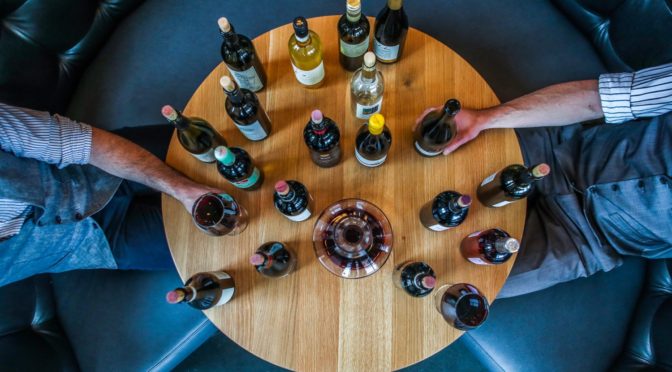 Photo by Zachariah Hagy on Unsplash

Many wine enthusiasts often drink wines based on where the wines are produced from, which grapes they are made of, or how old they are. On the one hand, others are not concerned about wine trivia and facts and drink wine based on the television shows they like. Here is a list of pop culture-themed wines every tv show fans should try.

This three-wine bottle collection is inspired from the American TV show Investigation Discovery featuring wines My, My, My Merlot (Merlot) that is named after investigator Joe Kenda’s favorite tagline while solving over 375 crimes, The Perfect Accomplice (Sauvignon Blanc), and A Wine to Remember (Red Blend).

The name of the wine is derived from the main character of the Netflix series Unbreakable Kimmy Schmidt. The wine is inspired by Titus Andromedon’s fascinating song about wine with lines “Pinot Noir, caviar, Myanmar, mid-sized car.” The collection includes a Pinot Noir and Rosé.

Symbolizing the four decades of thrilling performances and spot-on humor every Saturday night, the American television show Saturday Night Live presents a set of wines, each wine represent what the show is made of.

Know to be the father of all merchandises, Star Trek had its collection of wines, as well! This set includes four wines. The three wines are named after the serial movie episodes namely The City on the Edge of Forever (Season 1), Mirror Mirror (Season 2), and The Trouble with Tribbles (Season 2); while the remaining one is called Klingon Bloodwine.

This three-bottle wine collection highlights three of the most iconic stages from the fascinating and dramatic American dating show The Bachelor. Each bottle represents a significant part of dating such as The Fantasy Suite (Cabernet Sauvignon), One on One (Chardonnay), and The Final Rose (Rosé).

The Countess of Grantham Collection

The Countess of Grantham Collection is inspired by a character named Lady Cora Crawley from the British historical TV show Downtown Abbey. This collection is a set of two wines featuring Cabernet Sauvignon and Chardonnay, in which the two reflect the Lady Cora’s modern style and bold approach to the British aristocracy during the early 20th century.

Of course, the highly-acclaimed HBO series Game of Thrones will not be going to be left behind in the world of wine. Recently, Dornish Wine-Game of Thrones released a collection of wine including  Game of thrones Imp’s wine (Saint Emilion), also known as The Imp’s Delight, and others like Central Coast (Chardonnay and Red Wine Blend) and Oregon (Pino Noir).

This set is composed of the three limited edition red wines crafted for the fans of The Walking Dead. These three red wines are inspired by the characters from the show like Rick Grimes (Sirah), Negan (Red Blend: dark chocolate, vanilla, caramel, and three-month aged California bourbon), and Daryl Dixon (Cabernet Sauvignon).

New York star Bethenny Frankel from the American television series The Real Housewives of New York City created a quintessential collection of wine called Skinnygirl. This set includes Prosecco, Moscato, California Rosé blend, Pinot Noir, and many more. What makes it more interesting is that all of the wines are low in calories, which is perfect for any women at home.

National Public Radio (NPR) does not only deliver national and world news, but also present their show-related wines! This set of wines might ease your frustrations from the latest news. The collection includes Uncorked (Merlot), Weekend Edition (Cabernet Sauvignon) that represents NPR’s shows during weekends, and All Things Considered (Malbec).

These are few of the many TV shows, and movies inspired wines out there. These pop culture-themed wines are put into the market to attract more low-key drinkers. You might be surprised that there is even a Hello Kitty wine featuring an Italian Spumante and a sparkling Rosé.