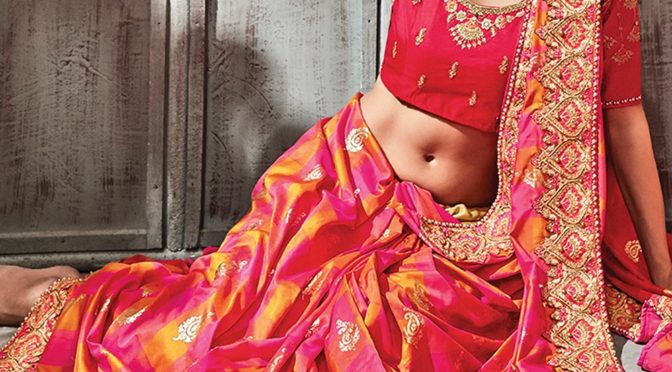 Ever heard of a Sari? Whether your answer is yes or no, knowing this type of clothing helps you to understand the different cultures in the world.

Sari is a type of Indian silk that is used often by women with an Asian origin. Some of the countries whose women are known to wear silk are Bangladesh, Nepal, India and Sri Lanka.

If you happen to visit one of these countries someday, you may want to blend in with their culture by buying silk clothing such as the Banarasi silk saree. If not in your country, you can easily shop for them online on such stores as Stylecaret.

So, what is Banarasi silk saree?

This is a type of saree manufactured in Varanasi, a city in North India. It comes in a range of colors that leave you awed with its beauty.

The Banarasi silk saree is not like your common type of clothing. It’s one of a kind and comes in a silver or gold zari. Zari is a thread that is commonly used in traditional Indian garments.

This silk is has got some engravings that make it heavy. It’s made of fine wool silk and has also got some intricate design.

Banarasi silk leaves you struck with some of its unique features that include:

Most Indian women put on Banarasi silk during important occasions such as weddings. They march well if groomed with other beauty wear such as jewellery.

The history behind Banarasi saree

The history of the Banarasi saree dates back to as early as the 17th and 18th centuries. It’s not only clothing for wearing on important occasions but has great value to the cotton textile industry.

History has it that the silk weavers of Gujarat had to migrate their hometown in 1603 due to famine. Historians believe that the weavers moved and settled in Banaras in the 17th century.

It’s in Banaras that silk weavers sharpened their artistic skills at around the 18th and 19th century.  This is evidenced by the skillful weaving of the traditional saree using silk materials. More interesting is the fact that saree making, in general, has now become a multi-million-shilling cottage industry that attracts millions of people both directly and indirectly.

The production of Banarasi silk is done mostly in Varanasi and is concentrated around the regions of Bhadohi, Chandauli, Jaunpur and Azamgarh districts. However, Indian craftsmen are now exporting this product to other parts of the world.

Banarasi silk saree has got four different varieties you could choose from. These four include:

The geographical significance of the Banarasi silk saree

Because of mechanization, Banarasi produced via this means is faster and cheaper at the same time. With its ballooning market demand, some manufacturers also opted to produce Banarasi silk using synthetic materials other than other than silk.

To counter this, a group of weavers in Utar Pradesh India, commonly referred to as weaver associations secured Geographical Indication rights for the production of Banaras Brocades and Sarees.

GI or geographical location gives you rights to intellectual property. That being said, GI identifies a good as coming from a given region that is known to have certain characteristics, features and qualities that are attributed to its geographical origin.

After the weaver associations obtained the GI certificate, Banarasi products were categorized into four classes and were to be legally sold within the six districts of Utar Pradesh under Banaras saree and brocade.

The four classes of Banarasi include

Is the production of Banarasi silk environmental friendly?

There have been environmental concerns over the use of chemical dyes in dyeing silk. Such chemicals when disposed cause pollution in rivers such as the Ganges river. Proposals have been made on the use of natural dyes that are more environmentally friendly in the dying of silk.

What does the future hold for sari weavers?

A completed Banarasi silk saree comes with much pomp and grace that leaves every Indian woman desire to have one in their wardrobe. Such skillful design would be unheard of thing without the dedicated time and effort of a weaver.

To design that beautiful sari, weavers spend 15 to 30 days of knitting and weaving the best of silk materials. The weaving period could go beyond 30 days depending on how complex the designs and patterns of the sari will be.

You will find most of Sari weavers in the city of Banaras busy at work. The raw silk for making Banarasi saree is sourced from southern parts of India such as Bangalore.

In the past, an electric power supply has been a stumbling block to weavers. Often times, it has been erratic. This turns out to be a big blow to weavers with electric powered looms. A shortage of power supply means a delay in the production process, weavers get to finish work over longer periods of time.

There is also stiff competition from other countries such as China doing mass production of Banarasi saree that is a look-alike of the ones produced in India. This makes the market flooded with cheap Banarasi silk saree that retail at a lower price.

There is a lot of work that goes into the preparation of the Banarasi silk saree. However, the end product leaves you begging for more. Despite its successful production in India and export to other parts of the world, Banarasi silk faces competition from look-alike products in the market. All said it’s a saree worth your cash.

One thought on “Banarasi Silk Sarees”