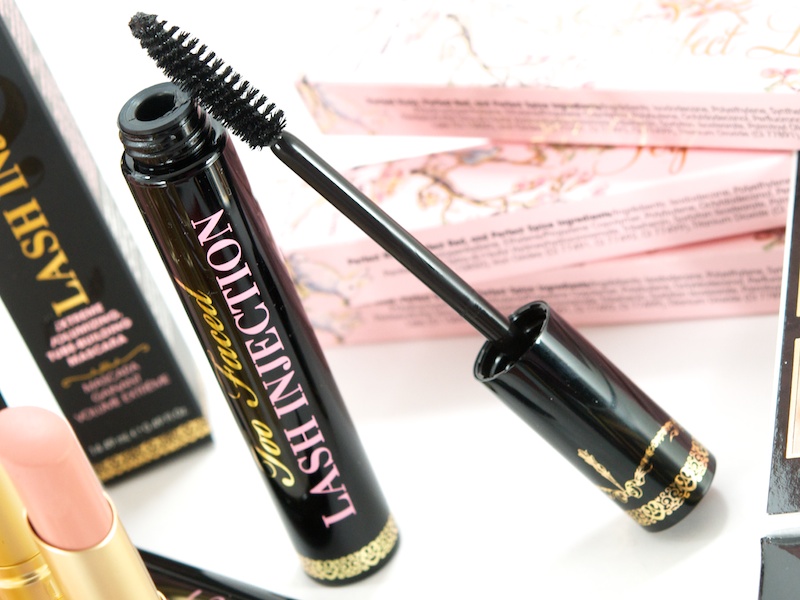 Before BeneFit They’re Real, there was Too Faced Lash Injection. Touted as the original end-all be-all falsies in a tube, all the hype surrounding Too Faced Lash Injection Extreme Volume Mascara led me to finally join the club and pick it up. So are the raves we heard true? Well, that depends on what you’re looking for. Read on!

packaging: 2.5/5 – The tube itself is a standard-issue mascara tube – what’s interesting is the applicator brush. The brush is huge, widthwise. It’s a fluffy conventional (non-plastic) brush style, but the stiffer bristles seem to help tame my wily lashes somewhat.

Seriously though, the brush is TOO big. I can’t grab the thin blond lashes in either corner of my eyes, and I actually managed to smudge mascara onto my skin trying. It’s even tapered at the end, and it’s still not small enough. (They’ve gone the other direction completely to solve this problem with the new Pinpoint edition of Lash Injection – that brush is teeny weeny.) I got it in Pitch Black, which used to be the only shade, but now they offer a Vivid Blue and Hot Chocolate as well.

lengthening: 4/5 – I was really surprised by the decent lengthening offered by this mascara. I expected fatter lashes, but I guess the tubing stuff wraps around the top edge of the lash too, because mine looked great and super long.

separating: 3/5 – Lash Injection mascara didn’t create the well-defined fake-looking lashes I usually adore, but instead it found all of my lashes (except for the teeny corner ones…grr) and coated them without clumping them together, leaving a natural looking wealth of lashes.

volumizing: 3/5 – This mascara added natural-looking volume, but it wasn’t as intense as I really expected. It’s more of, as I’ve said, a traditional and natural look than a high-drama, well-defined lash line, which is honestly what I prefer. Still, it did the job and doing it in a natural way is something to be praised for.

texture: 3/5 – The texture was unusually soft and natural for a mascara claiming such innovative technology, which was kind of refreshing. However, it lost points for flaking and clumping on subsequent coats. DON’T apply a third coat – you’ll end up with the dreaded spider lashes. Stick to two coats or continually apply the first one until you’re happy with it (that’s what I prefer).

The verdict: 7/10 – While I did like this product, I didn’t think it lived up to the hype it’s seen. However, I really look for a dramatic, intense and ultimately fake-looking effect in my mascara. If you’re looking for something more realistic and natural, this mascara may be for you – I just thought from all the marketing that this would be a high-drama false eyelash kind of look.