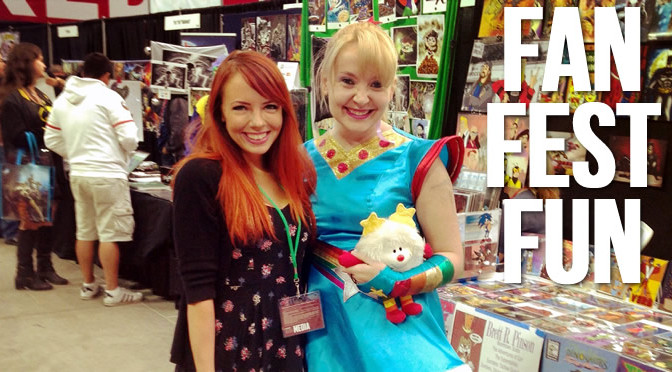 I’m gonna let you in on a not-so-secret secret: I’m a big ol’ nerd. I have loved videogames and quoted Star Wars and generally geeked out since early childhood and I’m confident it will never stop.

It’s not something people often guess about me if they aren’t nerds, but fellow nerds always somehow know. We share a strange ability to smell “nerd” on each other. That gleam in the eye at the use of a 10-dollar word; that knowing smile when someone drops a line from basically any movie, that shared sense of unabashed social awkwardness… I can’t fully explain it, but we have some subconscious way of giving off nerd pheromones.

With that in mind, my second most squee!!!-worthy event of 2014 (right after Phoenix Comicon) was its baby sister, Fan Fest. Yes, Fan Fest was basically nonstop geeking out, which as Bookman’s teaches us, is half the fun.

I pretty much went crazy over all the cosplays here – my fellow West Valley bloggers Asha and Steph were laughing at me the entire time. There were some amazingly awesome costumes that I simply HAD to be photographed with:

I can’t really name a favorite because there were too many good ones, but I was very excited to see a Five Nights at Freddy’s Foxy cosplay and many FNAF pieces from the artists. That’s so meta. Leave it to us nerds to be right on the cusp.

Now I simply cannot WAIT for Comicon to roll around again – Fan Fest was like an evil tease/appetite whetting. (And appetite satisfying after we ate at Yard House later.)

Check out Steph’s post on Fan Fest to get her perspective and see some lovelier pics too!