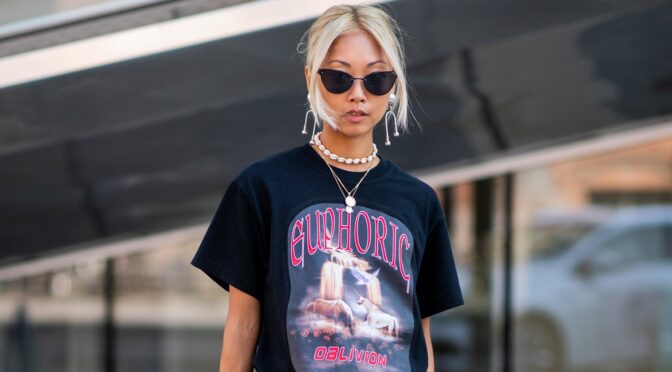 Graphic tees are fun to own and wear. They enable you to express your individuality and make bold statements about who you are and what you are about without saying a word. The graphic tee takes does that for you.

The original style of tee shirts generally remains today. They were white and had short sleeves. Really fancy models might include a breast pocket. The original tee shirt was not meant to be seen as much as worn beneath dress shirts. It helps to make a white shirt look white while blocking out skin color.

Colored tee shirts eventually became popular and generally were worn as primary shirts. They also work well beneath a sweater or a sweatshirt. The practical nature of tee shirts and generally simple design and construction made them popular. An affordable price made them indispensable. Today’s graphic tees build upon the simple tee shirt design with colorful flair.

Graphic tees have been wildly popular since they first appeared about eight decades ago. Actual research has been done to try to pinpoint when graphic tees became popular to wear. Some say the history of graphic tees traces back to the 1930s and possibly earlier.

Many early graphic tees advertised local businesses or were used as part of a work uniform. The first widespread appearance of graphic tees is traced to 1939 when workers on The Wizard of Oz wore graphic tees that said “Oz” in the classic and widely beloved film. The workers appear only briefly while ushering Dorothy and her travel companions into a spa in the great fictional land of Oz.

Other widely viewed examples of graphic tees would follow. Many local radio stations produced graphic tees that advertised their broadcast services, for example. And for some time, the graphic tee mostly served as a marketing tool for various goods and services. They also promoted brands noted for selling particular products.

Tee shirts generally are utilitarian forms of clothing that were not intended to be seen as much as worn underneath. The popular style gained universal acceptance. And the tee shirt’s affordable price made them desirable for anyone with a task to do. If you had to get a shirt dirty, it might as well be a tee shirt.

Today’s tee shirts come in a variety of colors but are loyal to the original style of no collar and sometimes no sleeves. Some are specially designed for women, which helps to add to their appeal. It also helps to open the market for more fashionable versions of the beloved tee shirt.

The emergence of fashionable graphic tees has made the tee shirt market highly lucrative. New designs by fashion designers are altering the traditional tee with high-priced versions that are meant to be worn as fashion instead of work shirts or marketing gimmicks.

The current market for fashionable tees is very strong and causing many people to rethink what the graphic tee is capable of doing. Different textures and designs help to add flair to the more graphic elements of the modern graphic tee.

Fashion designers are taking graphic tees more seriously. Designers are creating highly fashionable examples of the old graphic tee and selling them in large quantities and for high prices. The quality generally is better than the old plain white tee. And the graphics are more than silk-screened images and words.

Despite the recent emergence and growth of fashionable graphic tees, old-fashioned graphic tees are as big as ever. The market for vintage graphic tees is incredibly popular and makes them more accessible through online retailers. Some shirts are extremely valuable and could sell for many times more than they originally did.

Some of the most sought-after graphic tees are those that promoted concert tours by very popular rock bands that might not exist anymore. Whether you love them or hate them, a vintage Grateful Dead tour graphic tee could fetch a lot of money.

But many people prefer the original items with their minor flaws from prior wear and tear. A genuine vintage graphic tee can be very rare and highly desirable among collectors and enthusiasts. Whether seeking a genuine vintage model or one that is a current production, the graphic tee remains highly popular.