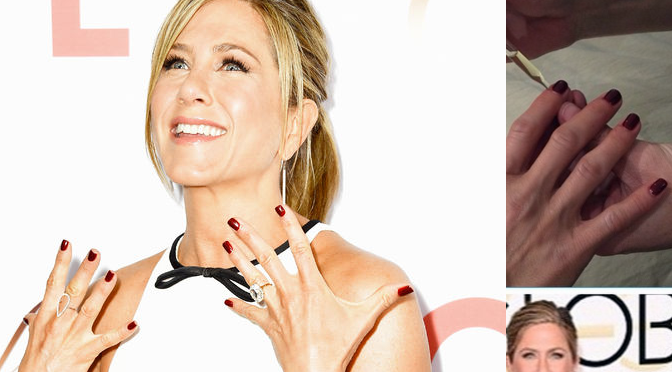 I’m in the mood for some celeb news that doesn’t involve what curvy woman Kanye is or isn’t romantically entangled with, so here’s something topical: Jennifer Aniston’s nail polish! Hey, it’s not hard-hitting news, but we’re not exactly CNN either.

We’ve done a deep-dive investigation on her nail polish faves. Here are our findings:

While filming the movie Marley and Me with Owen Wilson in Miami, Jen stopped off for a manicure at the Femme Coiffure salon. Aniston’s polish of choice? Essie in Mademoiselle, a classic and feminine pink. At only $7, Essie’s a cult favorite of polish lovers and a super affordable way to nab this celebrity look.

This is supported by her interview with People. “I like a good pink,” says Aniston. “And I mix colors a lot. Mademoiselle by Essie is one and OPI is good too.”

And it’s a rule: You’ve got to have a great mani to show off your engagement ring. “It’s true!” she says, laughing. “I used to not put nail polish on. I’d just buff.” 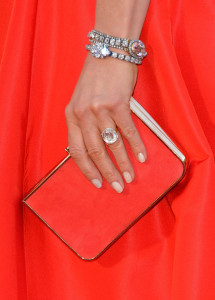 Redbook asked Jennifer in 2013, “Is there a nail polish you especially like?” She responded, “I’m a natural girl. But I go bolder on my toes.”

At the  Oscars at Hollywood & Highland Center on February 24, 2013, Jennifer showed off a nude-pink polish color (right) with her blingy ring and a pretty clutch.