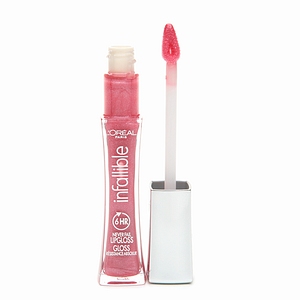 My rule on longwear lipcolor has always been to divide the number of hours it claims to last by three to get a closer estimate of how long the product will stick around. The hardest part, though, is finding lip gloss that actually looks good while it stays on. Luckily, I’ve discovered L’Oreal Infallible Never Fail Lip Gloss.

The applicator tip is the key to this product’s genius – it’s bent at an angle, making it easy to apply the gloss evenly in just one swipe per lip, while the pointed tip makes neatly covering the outer corners of lips and the arches under the Cupid’s bow a breeze.

The gloss itself isn’t the crumbly, inconsistent mess typical of longwear lipcolor; rather, it’s a creamy formula that’s only mildly sticky and looks amazingly natural. I tried it in #125 Bloom and feared the product would be a bit dark for my normally pale pink tastes, but the glossy shine lightens its appearance and the color looks simply made for me.

This gloss’s only downfall is in the 6-hour claim. Keeping drinking, eating, chatting, kissing and chewing gum to a minimum, this sucker still only runs about two hours. Still, that’s better than the masses of glosses I’ve tried. As well, let me clarify something for you: I have tried an awful lot of makeup, and I have never found a longwear product that lasts as long as the package says it will. NEVER.

An amazing product that’s earned a coveted spot in my purse, Infallible’s point loss is due only to the discrepancy in the longevity advertised and reality. Just be honest with me, makeup companies! I can take it.

L’Oreal Infallible Never Fail Lip Gloss sells at Amazon for $5 and change. Pick it up – it’s worth it!