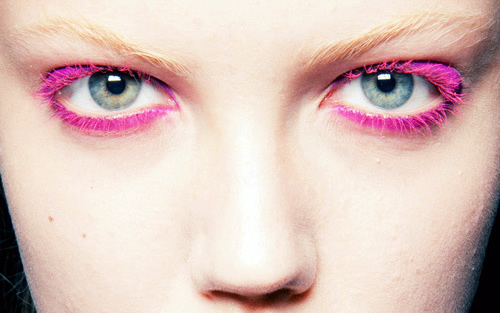 Ladies, it is official: I am insane. There is definitive proof that there’s something wrong with me. You see, when most people open a tube of mascara and see a shade of garish pink found only on feather boas, they have no trouble walking away.

Not me! I squeal, “How avant-garde!” and happily truck my finding over to a Kohl’s cashier who is understandably shocked that someone is buying Flirt Big Flirt Thickening Mascara in Fuchsia, of all things. (Incidentally, if you’re a retail associate in either the greater Houston or Phoenix metro areas, we’ve probably already met when I bought something stupid from your store.)

Applied, this was far from the America’s Next Top Model edge I’d hoped for. Instead, I looked a bit creepy and like I might have an infection since my eye appeared a puffy pink color. That’s not Flirt’s fault – pink mascara is best left for Dolce & Gabbana photo shoots. But they are guilty of encouraging this Technicolor dreamcoat of mascara missteps with catchy shade names like “Fuchsia Fusion”, “Violet Vixen” and “Real Teal”. Having Vanessa Minnillo as a spokesperson probably doesn’t hurt either.

Aside from that, the Flirt mascara itself wasn’t too impressive. “I’m buying it in black!”, you say? Fine. It does give a decent amount of volume, but the mascara is so clumpy it crumbled off my lashes in no time. Thumbs down!

4 thoughts on “My Adventure With Pink Mascara”