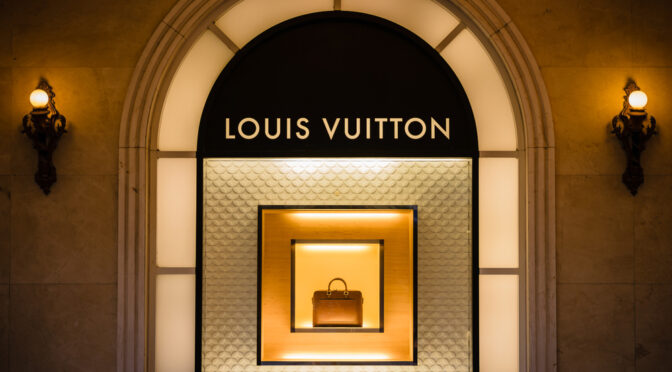 When you buy a Louis Vuitton bag, you’re not just purchasing a bag — you’re also purchasing hundreds of years of history, quality and attention to fine detail. Today, we’re having a look at a brief history of this world-famous luxury brand and tracking its journey from humble beginnings to the landmark of all things luxurious that it is today, so read on to find out more.

Born in 1821, the brand’s founder Louis Vuitton started with humble beginnings. At age 16, Louis trekked from Anchay to Paris on foot, eager and excited to experience the wonders of the city of love. Of course, one also has to earn a living along the way, which is why Louis held a job as a box-making apprentice to Monsieur Marechal. Little did he know, it was this key experience that acquired him the packaging and preserving knowledge that would soon take over the world.

Before long, Louis had built a solid reputation for himself as a master craftsman and his works were starting to be recognised by the Parisian elite. By age 30, his clientele list included  Empress Eugénie de Montijo, wife of Napoleon III and the most powerful woman in France at the time. Louis was to be Empress Eugenie’s personal box maker. And so, this rags to riches story begins.

The Beginning Of An Empire

In 1854, Louis opened his first workshop in Paris and soon revolutionised the trade with his first series of flat trunks, which to this day are considered the ancestors of what we now know as modern luggage. Louis’s trunks were water and odour resistant, lighter and rectangular in shape making them perfect for stacking. His iconic flat trunk in Trianon grey from 1858 was the first luggage of the modern era – it was easy to stack in a train’s baggage car or on a ship, and its poplar (wood) frame was covered in canvas. By 1859, Louis’ success required him to expand his operations, which led him to open his first atelier in Asnières, Paris. The workshop started with 20 employees, by 1900 there were nearly 100 people and by 1914 there were 225.

The Growth Of Popularity

By the time it was 1959, Louis was considered one of France’s most renowned trunk makers. It was no surprise that Louis’ expert craftsmanship won him an elite following, but things were soon to take a sour turn. Unfortunately, Louis’ Asnieres factory was destroyed during the Franco-Prussian war in 1870 but this wasn’t enough to stop him. Determined to succeed, he rebuilt a new shop in the ritzy 1, Rue Scribe. This fancy new store in its aristocratic location saw Louis Vuitton’s shift from regular trunks to luxury luggage.

By the time it was 1885, Louis had even opened his very first stores in London. In that same year, for the first time in the company’s history, their registered trademark appeared on the canvas of its designs.

But it wasn’t just luxury to design and expert craftsmanship that put Louis Vuitton on the map. In 1886 he and his son George revolutionized luggage locks by designing a single lock system with two spring buckles. Customers could now travel with peace of mind knowing that their belongings were safe from theft. The effectiveness of the Tumbler lock is indisputable and still appears on Louis Vuitton luggage today.

After his death in 1892, son George stepped in and took over the business. It was under his leadership in 1896, the now world-famous “LV” monogram was introduced — a monogram that remains a lasting symbol of luxury and the fine life until today. Fast forward to 1914 and George opens the world’s largest travel article store at the Vuitton Building, at 70, Champs-Élysées. During this period, the monogram canvas was revamped in 1959 to accommodate its expanding line of wallets, bags and purses. Over the next 40 years, the brand would start to introduce an even wider variety of bag designs including handbags, backpacks and carry bags that would then take the world by storm.

In 1997, Mark Jacobs was appointed Creative Director, which then saw Louis Vuitton venturing into the world of clothing and shoe production. LV’s ready-to-wear collections, designed by Marc Jacobs, were produced in 1998. Jacob’s helped breathe new life into the brand by making Louis Vuitton hat boxes and the new Monogram Vernis collection popular among iconic supermodels like Naomi Campbell and Kate Moss.

Throughout the 2000s, LV collaborated with various prominent designers including

The house of Vuitton’s journey and evolution over the past 200 plus years is nothing short of remarkable. Louis Vuitton’s original atelier in Paris is still where products are crafted today and has been expanded to include the Vuitton family residence.

Fast forward to us now entering 2021, Louis Vuitton still remains a prominent name in the luxury fashion industry and is predicted to grow even further and larger in the coming years.