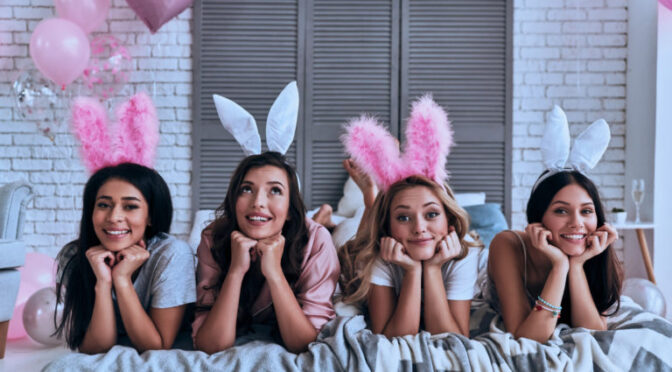 As much as we love easter here in the UK, it’s difficult to describe our traditions during the holiday as anything other than fairly sensible. That said, if an alien came down from outer space and asked us to explain why we all were wandering around hunting for tiny painted eggs, it might come across as a little curious.

Local traditions never seem that out there to the locals, but some of the ways different countries around the world celebrate are, shall we say, interesting. From the butter lambs of Eastern Europe to the French feeding a thousand, here are some of thew world’s craziest easter traditions.

Whipping up a controversy in the Czech Republic

You’d think a tradition involving whipping women might have managed to make its way out of practice by now, however that’s not the case over in the Czech Republic.

Following an old pagan ritual, Czech men are encouraged to parade around their town singing ditties and lightly whipping the local women’s legs and buttocks with a willow branch. The reason? According to the tradition, it’s to encourage fertility.

Undoubtedly controversial due to the sexist and backwards symbolism, there’s understandably a lot of chatter around how long the practice can continue. With 2020’s annual event not taking place due to COVID-19, who knows whether the tradition will resume in 2021.

While most of us are keen to a few easter eggs across Easter weekend, the Russians instead like to accompany their easter meal with a knob of butter shaped like a lamb. This tradition spans from ancient times where it was considered a good omen to come into contact with one.

Furthermore, the lamb is the only animal that Satan cannot mimic the form of – good to know, right?

Return of the Giant omelette in France

We all know the tale of Jesus feeding the five thousand, but what about a giant omelette feeding a thousand? Head to Bessières, France, and you’ll find they’ve been making giant omelettes – made of a mere 15,000 eggs – since 1973.

The origins of the monstrous omelette date back to the days of Napoleon, where legend has it that he and his army stayed over near Bessières one night. The famous warlord was served an omelette by a local cook, and he enjoyed it so much that he ordered the local townspeople to gather all of the eggs in the village in order to prepare a giant omelette for his army the next day.

Today, these omelettes can be prepared on demand around France by the aptly named Giant Omelette Brotherhood of Bessières, so no one has to miss out on the action.

It’s not much fun in the Philippines

Things take a much more sinister turn in some parts of the Philippines, where devout Catholics are known to take part in acts of self-crucifixion and self-flagellation on Easter, presumably to mirror the pain Jesus famously faced on the cross. The belief is that the action with help to purify participants and cleanse them of their sins.

The Catholic church, meanwhile, is understandably not too impressed and is actively trying to discourage this extreme practice.

So, there you have it, four of the stranger easter traditions found around the world ranging from the rather troubling to tastebud tantalising. When you sit down for your roast this easter (minus the knob of lamb-shaped butter), perhaps you’ll be glad you’re not engaging in some of the weirder traditions found across the globe.