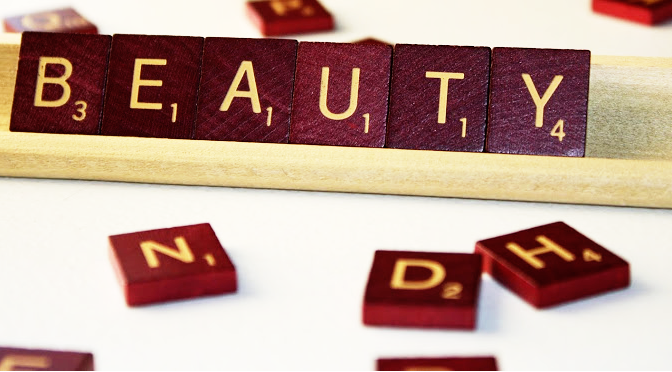 So you know that weird phenomenon where you learn a new word or talk about something really random, and then it seems to follow you around?

(Actually, I’m pretending to sound like I don’t know what it’s called right now, but I do. There’s a name for it and that name is the Baader-Meinhof phenomenon. I often do that – pretend not to know as much about things as I do – because I trained myself to do so at a young age. I find that sounding like you know too much about something can make other people uncomfortable, so I tend to “dumb myself down”. This habit is almost universal among intelligent women, and that vaguely relates to what we’ll be discussing today.) 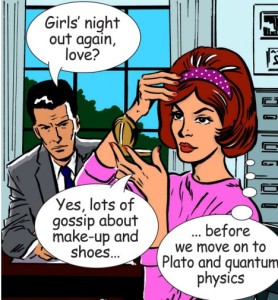 Though Baader-Meinhof isn’t as magical as it sounds (it’s pretty much just cognitive bias that makes you notice the new thing more now that you’ve seen it), it struck me recently in the form of the discussion of reconciling beauty with feminism and being pro-women.

This is a concept I struggle with often. Writing about beauty every day leaves me wondering sometimes, what am I contributing to women? Am I a detriment to our little girls’ development? Or is it a fun escape, a digital candy bar that needs no judgment, as long as it doesn’t come from a place of feeling lacking?

Of course, I try to keep it fun and lob in a post every now and again reminding my gals that they’re perfect when they roll out of bed and that there are far more critical things to obsess over… but still, it’s a topic that haunts me.

I saw a Facebook post from a relative on the subject with this offensive picture (don’t worry, her post was critical of the picture – and rightfully so). We had an extensive, healthy and intelligent conversation that followed and I don’t want to misrepresent what was said by taking it out of context, but the basic gist can be summarized in a few basic questions:

Then, shortly thereafter, I was confronted with this insightful and spirited post in my News Feed from Oh Chic that deals with the topic of whether or not beauty and feminism are mutually exclusive. I was utterly delighted by it. (See my comment as proof.)

On the surface, I agree that no one should expect themselves to be perfect in any aspect of their lives, but I think some people spend a lot of time on hair and makeup for the reasons I do: because they genuinely enjoy doing hair and/or makeup. I find playing with makeup and such a fun, creative exercise that isn’t about seeking flawlessness, but more of an artistic endeavor, kind of like doing crafts.

I know that’s a strange way to think of it for people for whom it isn’t fun to do makeup;  if it’s more of a chore for you, it’s hard to imagine why someone would spend hours on it unless they’re completely superficial. Heck, I certainly don’t understand the men who buy golf magazines or spend hours perfecting their swings. It takes different strokes, as they say.

That being said, I do think beauty can get out of proper perspective quickly, as can any hobby like trying to have a perfect house or a perfect body. Too many gals suffer from a kind of “beauty dysmorphia” – that’s why you see so many ladies who seem to be addicted to cosmetic surgery and fillers. What they see when they look in the mirror is not the same as what we see when we look at them.

If you expect perfection, anything else will just look like “not enough”. As my relative noted, there is freedom to be found in imperfection.

If you’re also in the beauty industry, be it a beauty blogger, makeup artist, stylist, or whatever, how do you deal with your work’s impact on women? Do you see helping others with their appearance goals as empowering? Do you not take it too seriously and see it as simple fun that shouldn’t be overanalyzed? Thoughts are encouraged – I want your input.

6 thoughts on “Can You Work In The Beauty Industry and Still Be Pro-Women?”