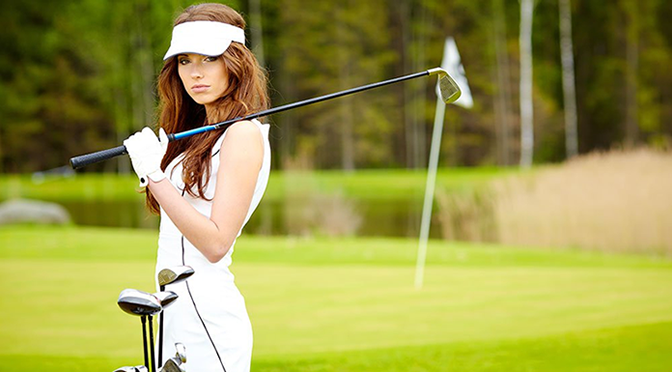 These days, when we think of women golfers, top professional athletes like Lydia Ko, Lexi Thompson, and Inbee Park come to mind. In our heads, we see these modern players donned up in today’s standard golf wear—collared polo shirts, slacks, spiked golf shoes, plus a cap or a visor to keep the sun away from their eyes. We’d probably also imagine women golfers in capri pants, shorts, and skorts in warmer weather conditions.

This modern archetype of a female golfer dressed in proper golf wear would have been unrecognizable a century ago. Granted, this fact about fashion will be true for most other groups of people separated by a hundred or so years, but knowing how much has changed in golf wear is still quite interesting. In order to trace the history of women’s golf wear, one must first go back to where everything started.

The Beginnings of Golf

Golf in its modern form is generally regarded as a Scottish creation, dating back to at least the 15th century. In 1457, King James II issued an edict prohibiting people from playing “gowf” and “futball” because they apparently distracted young military men from their archery lessons. The ban was lifted during the reign of his grandson, James IV, who became a golfer himself.

Possibly as early as the 17th century, male golfers began wearing baggy-kneed trousers known as knickerbockers, and thick tweed jackets and caps were put into the mix to help with the biting cold that players often had to contend with. From cravat neckbands and tailored tailcoats to vests and single-breasted jackets, golf wear up to the late 19th century tended to reflect the fashions popular among wealthy men, with whom the sport was most popular.

Women on the Golf Course

As for women, tradition has it that Mary Stuart, Queen of Scots, was the first woman golfer. She is said to have played and lost a match to her lady in waiting, Mary Seton, who later received a necklace from the queen as a prize.

The earliest news document that referenced women playing the sport, however, was a Scottish paper called Caledonian Mercury. The reporter talked about how a woman, known only as “Charming Sally,” won a match against another female golfer in a game played in 1738 at the Bruntsfield Links parkland in Edinburgh. The women’s husbands acted as caddies during the match, which reportedly drew large crowds.

Women’s Golf Fashion through the Decades

Traditionally considered as the home of golf, the Old Course at St. Andrews was officially established in 1552, although people, including King James IV himself, had been playing in the area years earlier. By the 1860s, groups with female members had begun playing golf on the links at St. Andrews.

At that time, women’s golf wear pretty much resembled the everyday Victorian dresses that ladies wore. Ensembles consisted of voluminous skirts under caged crinolines, which, although were flatter in the front, still often caught the swinging club. In addition, tightly fitting sleeves didn’t offer much freedom of movement for the arms.

More practical clothing options began to appear in the 1900s. In the year 1904, London-based outfitter Thomas Burberry introduced the Free Stroke Coat, which had sleeves that permitted women to accomplish full swings. He also introduced the drawstring skirt design to female golfers, which allowed for long skirts to be raised a few inches off the ground. This design was already long popular among croquet players. Later in the first decade of the 20th century, knitted cardigans also became an acceptable substitute for jackets. This gave more women the chance to perform better swing control.

During the Flapper Era of the 1920s, shorter skirts became the norm among female golfers since showing the lower part of the legs became socially acceptable. Ensembles composed of a blouse and a skirt (either pleated or straight), plus a sweater or a vest became popular.

Between the 1930s and the 1940s, women’s golf wear followed popular street wear trends. Fashionable tailored one-piece dresses like shirtwaisters became very much in vogue. In 1933, however, professional golfer Gloria Minoprio broke fresh ground when she became the first woman golfer to wear slacks. Her outfit has since been immortalized in the British Golf Museum at St. Andrews.

One-piece dresses continued to become popular through the 1960s and 1970s, although two-piece outfits composed of a skirt and a blouse topped with a cashmere sweater also became popular. Increasingly, manufacturers began using synthetic materials like rayon and polyester to emphasize on the performance factor of these sportswear.

Today, both women and men’s golf wear are made to accommodate the aesthetic and performance aspects of golf. But while fashion on the golf course has evolved to become more liberal, it still has a lot of conservative characteristics, as manifested in the dress codes that many golf courses and golf clubs maintain today.

To make sure that you are dressing right for your next game of golf, make sure to check with the club if they have any such dress code. It would also help if you buy your outfits and gear from reliable manufacturers of golf wear and accessories that make their products according to currently accepted standards.