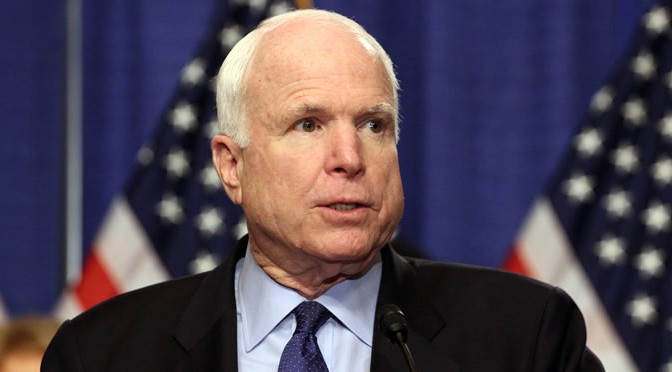 If I appear on prime time television when I’m 72 years old, I’ll spend as much on hair and makeup as my budget allows. Apparently, John McCain’s got five grand tucked away for just such an occasion.

US Weekly reported that McCain gets TV-ready with makeup artist Tifanie White, who’s worked on So You Think You Can Dance and American Idol. According to the Federal Election Commission, McCain paid the 2002 beauty-school grad $5,583.43 for her makeup artistry services.

It’s not unusual for politicians to employ professional cosmetologists before appearing on television. Former GOP candidate Mitt Romney spent $2,000 for makeup artists when he was governor of Massachusetts. And who can forget Democrat John Edwards‘ infamous $400 haircuts?

But apparently, John’s a little sensitive about the subject of personal care. In 1992, the following exchange took place between McCain and his wife:

Cindy playfully twirled McCain’s hair and said, “You’re getting a little thin up there.”

McCain’s face reddened, and he responded, “At least I don’t plaster on the makeup like a trollop, you c**t.”

Yeah. Those asterisks stand for exactly what you think they do. To his WIFE.